Ministry of Culture and Sports of Greece press release

Important new discoveries have recently come to light at the Sanctuary of Zeus at Mt. Lykaion, located high in the Arcadian mountains of Greece, and known in antiquity as the birthplace of Zeus. The southern peak of the mountain served as a primitive ash altar for burnt animal sacrifices to Zeus, and the lower mountain meadow hosted famous athletic festivals. Since 2004, a Greek-American archaeological team, the Mt. Lykaion Excavation and Survey Project, has been working at the sanctuary, and excavations at the altar have proven to be very rich and informative. Significant recent discoveries include pottery as early as the Neolithic, Early Helladic and Middle Helladic periods, and the presence of a significant Mycenaean mountain top shrine as well as an Early Iron Age cult place. There is abundant evidence for animal sacrifice, predominantly from goat and sheep femurs, representing continuous cult activity from the Mycenaean period through to the Hellenistic period. It is likely that Zeus was worshipped here from the 16th century B.C., in the early Mycenaean period.

During the summer of 2016 from a trench located near the center of the mountain top, and close to a man-made platform of stones, a human burial was found in the sacrificial altar, within a simple border of field stones on the long sides, and with an east-west orientation. The length of the stones is 1.52 meters. The central portion of the burial was covered with stone slabs over the pelvis area. Several ancient literary sources mention rumors that human sacrifice took place at the altar, but up until a few weeks ago there has been no trace whatsoever of human bones discovered at the site. Preliminary analysis suggests that the skeleton was that of an adolescent, and the ceramic evidence found with the body suggests that the burial was made during the eleventh century B.C., after the collapse of the Mycenaean palaces at the time of transition from the end of the Late Bronze Age to the Early Iron Age. Scientific analyses of the bones will be undertaken immediately, and although it is premature to speculate on the nature of the death of the individual, the prominent location of the burial within the sacrificial altar, and its east-west orientation, indicate its significance.

New discoveries were also made in the lower mountain meadow, site of the lower sanctuary. Some of the highlights include an impressive stone staircase at the top of the 4 th century B.C. corridor, and a large stone archway at the other end, presumably through which athletes would have descended towards the hippodrome and stadium. In the Administrative Building, a large, decorated terracotta sima block was uncovered. In a large circular depression, visible from Google Earth, to the west of the Stoa, and to the east of the fountain house, excavations revealed two well preserved water channels, a stone water basin, and the beginning of a stone wall, perhaps to be associated with the Sanctuary of Pan. Within the hippodrome, the only visible example in the Greek world, the racecourse floor was exposed. Work in the area of the 4th century bath facility has revealed walls from earlier levels. The present work will continue at the sanctuary until 2020.

The Mt. Lykaion Excavation and Survey Project is a joint Greek-American team working under the auspices of the American School of Classical Studies at Athens. The director of the project is Dr. Anna Karapanagiotou of the Ephorate of Antiquities of Arcadia and the co-directors are Dr. David Gilman Romano and Dr. Mary Voyatzis of the University of Arizona.

The Mt. Lykaion Excavation and Survey Project is supported by the National Geographic Society Committee for Research and Exploration, the Institute for Aegean Prehistory, the Parrhasian Heritage Foundation, the Karabots Foundation, the National Science Foundation, BCS#1125523 (2011-2014), the Fowler Merle-Smith Charitable Lead Trust and by over 70 individual donors.

FIG. 2 Human burial found near the center of the ash altar of Zeus with stones covering the central portion of the body. Photo by Titus Frelinghuysen 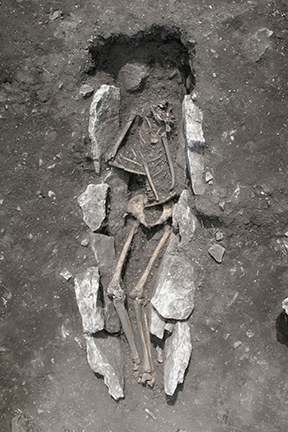 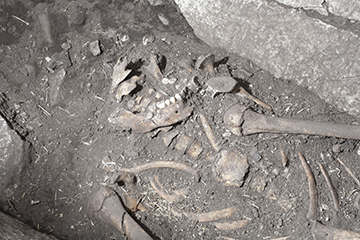 FIG. 4 Detail of head and chest of body. Photo by Titus Frelinghuysen 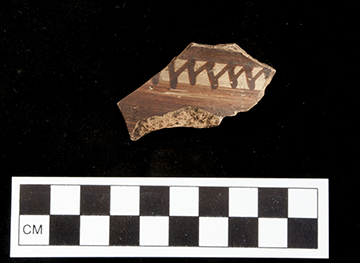 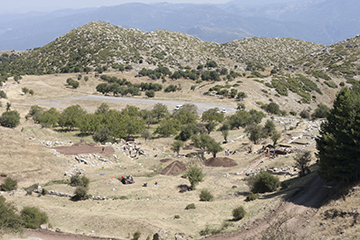 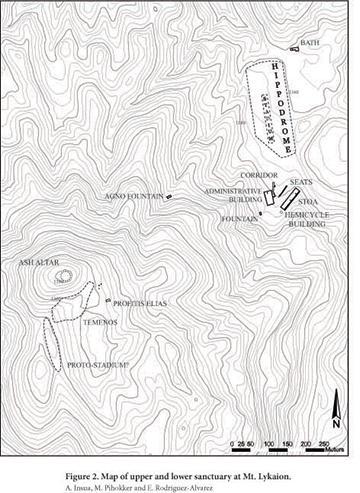 FIG. 7 Plan of the Sanctuary of Zeus at Mt. Lykaion. Plan by D. G. Romano, A. Insua, M. Pihokker and E. Rodriguez-Alvarez 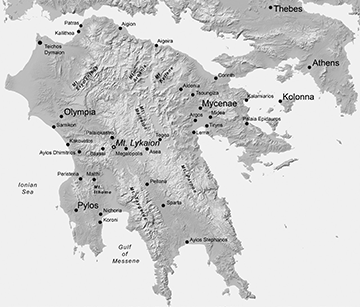 FIG. 8 Map of the Peloponnesos showing the location of Mt. Lykaion. Map by D. G. Romano, M. Pihokker and A. Meyer 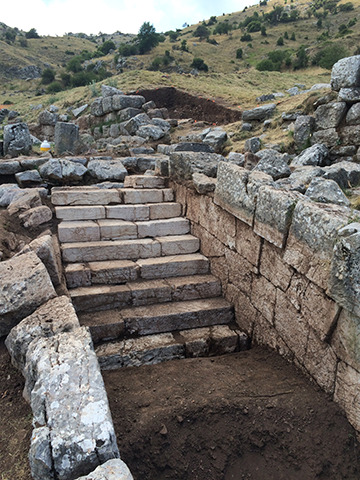 Dr. George H. Davis debuts Geologic Structures, which presents 3D photographs from his personal collection of geological samples collected from around the world. Of particular interest to the MTL team are the samples that he collected while conducting research in the Peloponessos: